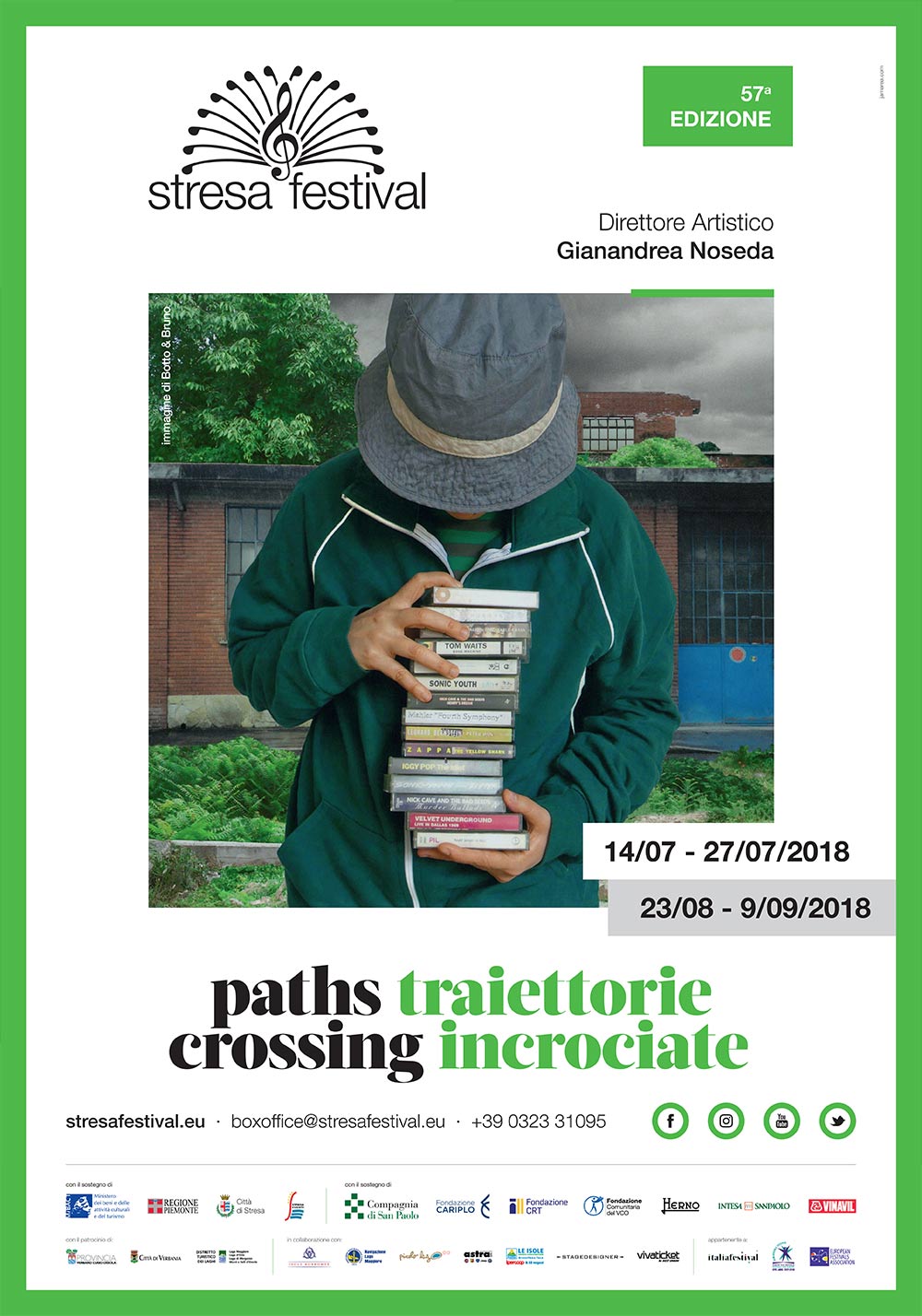 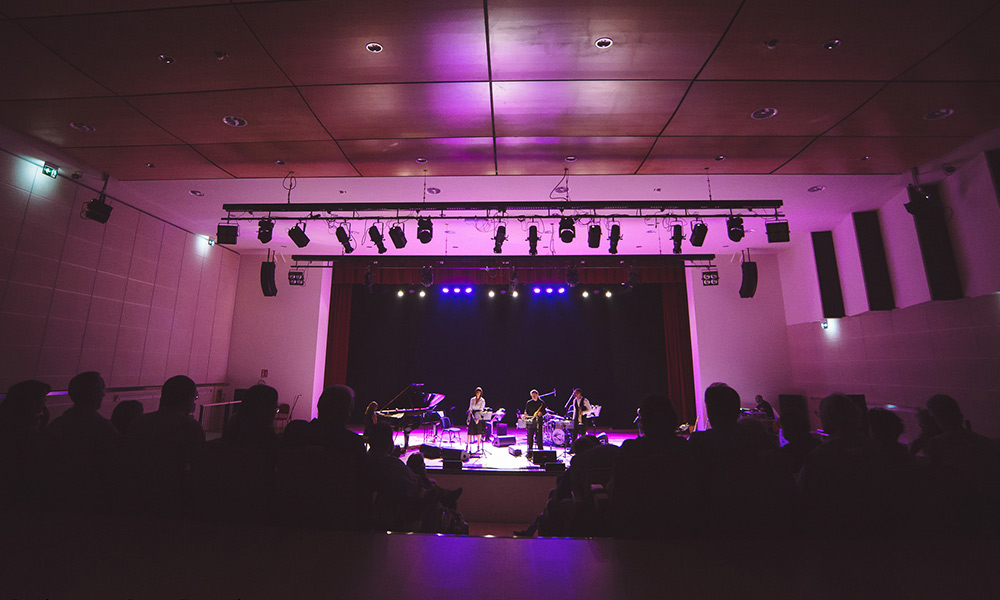 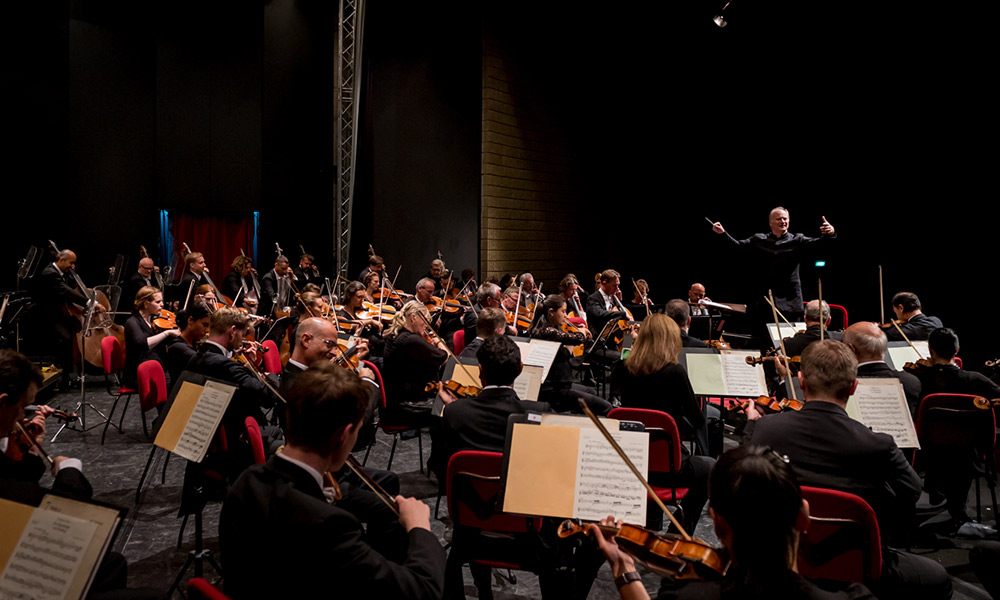 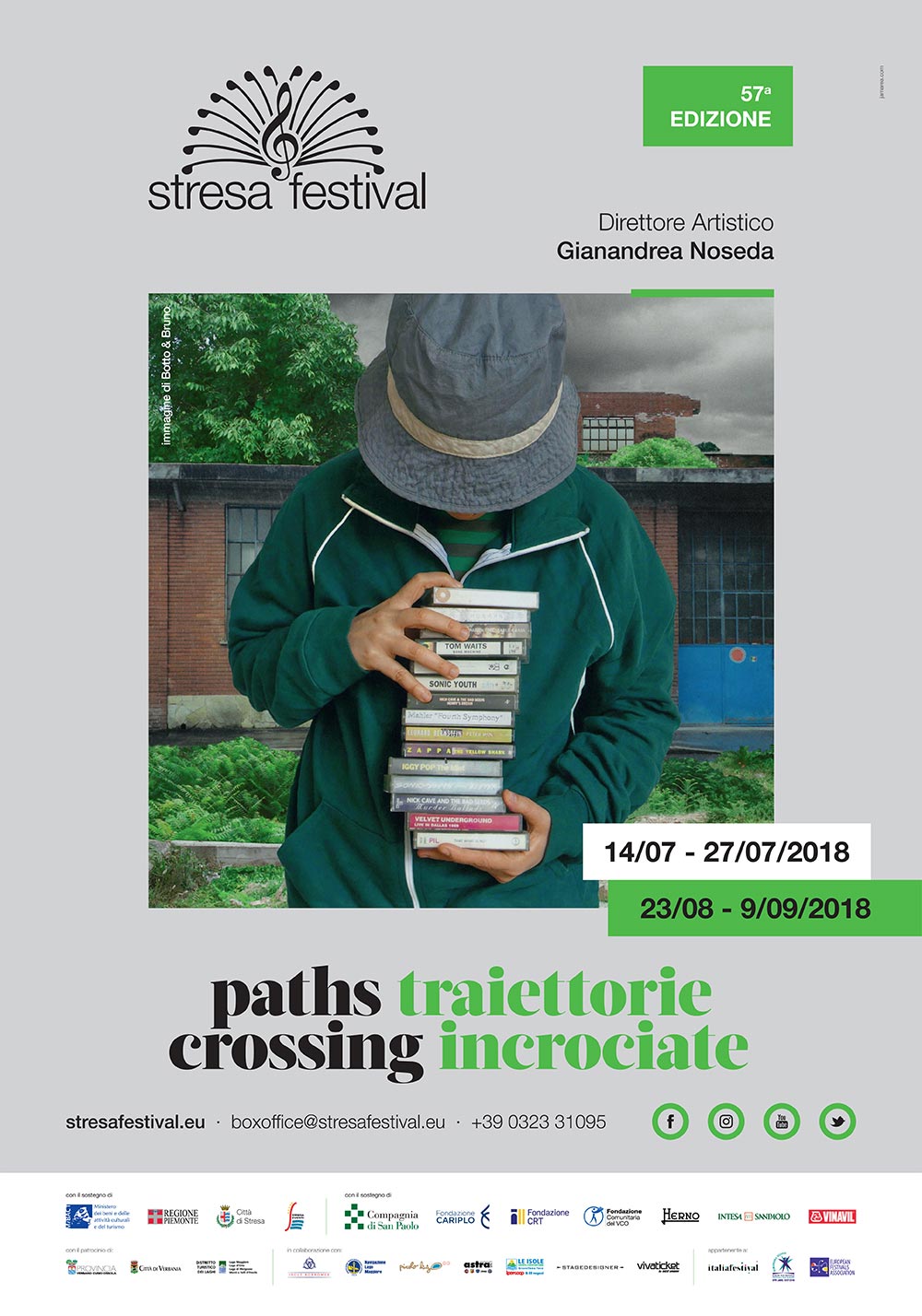 A melting pot of art forms

Stresa Festival, now at its 57th edition, is not going to give up its long tradition, but right now it is renewing itself.  There are more events, spread over two periods: from July 14 to 27 eleven evenings are scheduled, and from 23 August to 9 September there will be another 16 in Stresa, Verbania, the Borromeo Islands and the Hermitage of Santa Caterina del Sasso on the cliff at Leggiuno.

Gianandrea Noseda, who has been artistic director of the Festival for 19 years, guaranteeing the quality of its programs, has given the ‘formula’ a fresh look this year. All 27 concerts in 2018 are linked under the heading of Traiettorie incrociate – Paths crossing: intertwined paths, combinations of separate disciplines, opportunities for the public to encounter the various languages of these arts. The Festival presents a new face, a melting pot where numerous forms of expression meld together, each upholding its own traditions, history and commitment.

This year continues the Festival’s renewal of its programs, with a broader range of music, alongside the long tradition of classical performances.  Italian and foreign symphonic orchestras, internationally renowned ensembles and soloists are the spokes around which the Festival revolves, true to its historic vocation as a bearer of the best of classical music.

While music is always at the heart of the concert program, for some years now the Festival has looked outwards to include dance, theater, literature and multimedia events. The disciplines within the purely musical action not only add value with their forms and artistic content, but also offer a variety that enriches and broadens our outlooks. The Festival becomes the melting pot for an ever richer range of art.

Vinicio Capossela: something different for the inauguration

Vinicio Capossela is an Italian song-writer, musician and singer, who will be a guest at the Stresa Festival for the first time, to inaugurate the 2018 Concert Season. This is a special project, shared with the Filarmonica Arturo Toscanini.

To help you choose: topic headings

Just reading through the program you see how all the paths mingle. Their subtle circuit forms five topic headings, to guide you in your choice of concerts.

AMERICA OGGI (America Today) is dedicated mainly to 20th century American music.  This heading groups six concerts, four of them in memory of Leonard Bernstein, who was born 100 years ago. Gianandrea Noseda pays tribute to this American composer, pianist and conductor at the beginning and end of the Festival. On 24 August he will conduct the European Union Youth Orchestra with the young piano soloist Seong-Jin Cho, in a program offering music by Bernstein, Chopin and Tchaikovsky.  Then, closing the Festival on 9 September, he will conduct the Italian première of the concert version of Peter Pan with the Filarmonica Teatro Regio Torino, Ars Cantica Choir, soprano Cristina Zavalloni, baritone Nicola Ulivieri and a young actor,  Pierpaolo Preziuso, as narrator.

Then on the 25th of August, the tribute to Bernstein will continue, in an evening with the Spanish pianist Moisés P. Sánchez and his Ensemble, performing a world première of jazz arrangements of Bernstein’s music, commissioned by the Festival.

On 26 August, Natalie Dessay, one of the great names on the international lyric scene, will be accompanied by the Paris Mozart Orchestra under their conductor Claire Gibault in a broad program of items by Bernstein, Finzi, Barber, Sinatra, Ellington, Berlin, and Monk, while work by Edward Hopper will be projected.

On 24 July the Ensemble dell’Accademia Teatro alla Scala conducted by Kristjan Järvi will perform The Yellow Shark, Frank Zappa’s last musical project, dated 1993, published in a CD before his death.

On 26 July the Arte Quartett will play sax quartets by Riley, Sommer, Ruef, Glass, Zorn, and Zappa, in the garden at the Loggia del Cashmere on the Isola Madre.

JAZZ OGGI is this year’s version of the jazz program the Festival has run for seven years now.   Well-known names in today’s jazz scene will alternate on stage on the Lakeside Palazzola in Stresa on 18, 19 and 20 July.

Shai Maestro enjoys the critics’ approval as one of the latest jazz stars, and the Fabrizio Bosso Quartet and Paolo Silvestri Ensemble propose a tribute to Duke Ellington. Steve Coleman, one of the most fascinating and compelling contemporary jazz performers, brings this cycle to a close, with his Five Elements.

Evoking all the allure and charme of the great stars of those years, the German artiste Ute Lemper will be on stage in Verbania on 21 July presenting her Last Tango in Berlin: the trip takes us from the Berlin of Brecht to the Buenos Aires bars, with enthralling numbers by composers like Bertolt Brecht, Kurt Weill, Schultze and Hollander, but also other artistes like Charles Trenet, Jacques Brel, Leo Ferré, Georges Moustaki, Serge Gainsbourg and Astor Piazzolla.

On 29 August Stresa will hear the Budapest Festival Orchestra, considered one of the ten best symphony orchestras in the world. Their ‘historic’ conductor Iván Fischer will be flanked by soprano Christina Landshamer, in a program dedicated to Mahler, Enescu, Bartòk.

At the Cabaret Überbrettl, one of the earliest literary cabarets in the German capital in the early 20th century, you might have found the young Arnold Schönberg.  The evening of 31 August is dedicated to this Austrian composer and the musical performance of his Pierrot Lunaire will be accompanied by the first-ever projection Massin’s tavole. This visual transposition of the score was designed by the French graphic artist starting from 2000. Maddalena Crippa will be the narrator, with the Stresa Festival Ensemble under the baton of Nuno Coelho, winner of the Cadaquès International Competition. Benedetta Saglietti and Valentina Manchia are the names behind this multimedial event. In the first part we find three of Johann Strauss Junior’s waltzes, re-worked by Schönberg, Berg and Weber in a version for chamber ensemble with piano.

On 4 September the Festival will be showing the silent film Der Rosenkavalier by Robert Wiene, dated 1925, with a script by Hugo von Hofmannsthal.  During the projection the Orchestra Sinfonica di Milano Giuseppe Verdi conducted by Frank Strobel will play Richard Strauss’s score, a re-work of the original of the opera.

Dance with the pianist Giovanni Bellucci will be the program for 7 September: Jeux, a ‘danced poem’ by Debussy, in the version for solo piano, will be accompanied by Eugénie Andrin’s choreographic tricks, interacting on-stage with a multimedial projection edited by Gabriel Grinda.  In the first part comes Berlioz’ Symphonie fantastique op. 14 transcribed by Franz Liszt for piano.

BETWEEN SACRED AND PROFANE will occupy two evenings in the Palazzo Borromeo on the Isola Bella, The program on 28 August is dedicated to Monteverdi, with Rinaldo Alessandrini leading the ensemble Concerto Italiano. On 30 August the Quatuor Hermès will play Haydn’s string quartet The seven last words of Christ.

BACH, OUR CONTEMPORARY will fill four evenings dedicated to the Leipzig Kantor. On 1 September the Ars Cantica Choir alongside the Järvi Instrumentalists,  under the baton of Marco Berrini, will present music by J.S. Bach and Arvo Pärt.  On 3 September the Belgian organist and composer Bernard Foccroulle will interpret not only Bach’s music, but also some  of his own, while also paying tribute to Mensch, Frescobaldi, Berio, and Buxtehude.

The two special appointments on 5 and 6 September at the Santa Caterina del Sasso Hermitage feature Bach’s Suite for violoncello solo, interpreted by the Spanish cellist Asier Polo who is considered by the specialized music press one of the most important cellists of his generation.

Then there are all the other appointments with dance and literature, the concerto lesson and the Academy, not to forget the ‘Isola in Festival’.

The success of last year’s Isola in Festival has encouraged us to repeat the event, but with different programs. On 14 July the Isola Bella will house an evening dedicated to film sound tracks, dance and video projections.   Then on 22 July, join us on the Isola dei Pescatori for entertainment on the theme of the Roaring Twenties.

Theater-dance with artistes from the Tanztheater Wuppertal and the Sasha Waltz & Guests company will be staged on 27 July as a tribute to Pina Bausch, marking the anniversary of the birth of this German choreographer who revolutionized the dance world.

For the Meeting with the Author on 25 July, the Festival’s guest is Gianrico Carofiglio, an Italian author, politician and ex-magistrate, who will be accompanied on the trombone by Gianluca Petrella. This is an ‘invention with two voices’, a dialogue between two worlds and two generations.

On 8 September the pianist, musicologist and university professor Emanuele Ferrari will play a piece of music, then immediately dissect it and explain it phrase by phrase.  He has taken three of Gershwin’s preludes and turned them into a fascinating concerto lesson.

On the heels of the previous editions in 2010 and 2012, the Accademia di canto di Stresa (Stresa singing academy) is back. The singers attending Barbara Frittoli’s lessons will perform in a concert on 23 August leading up to the Festival.