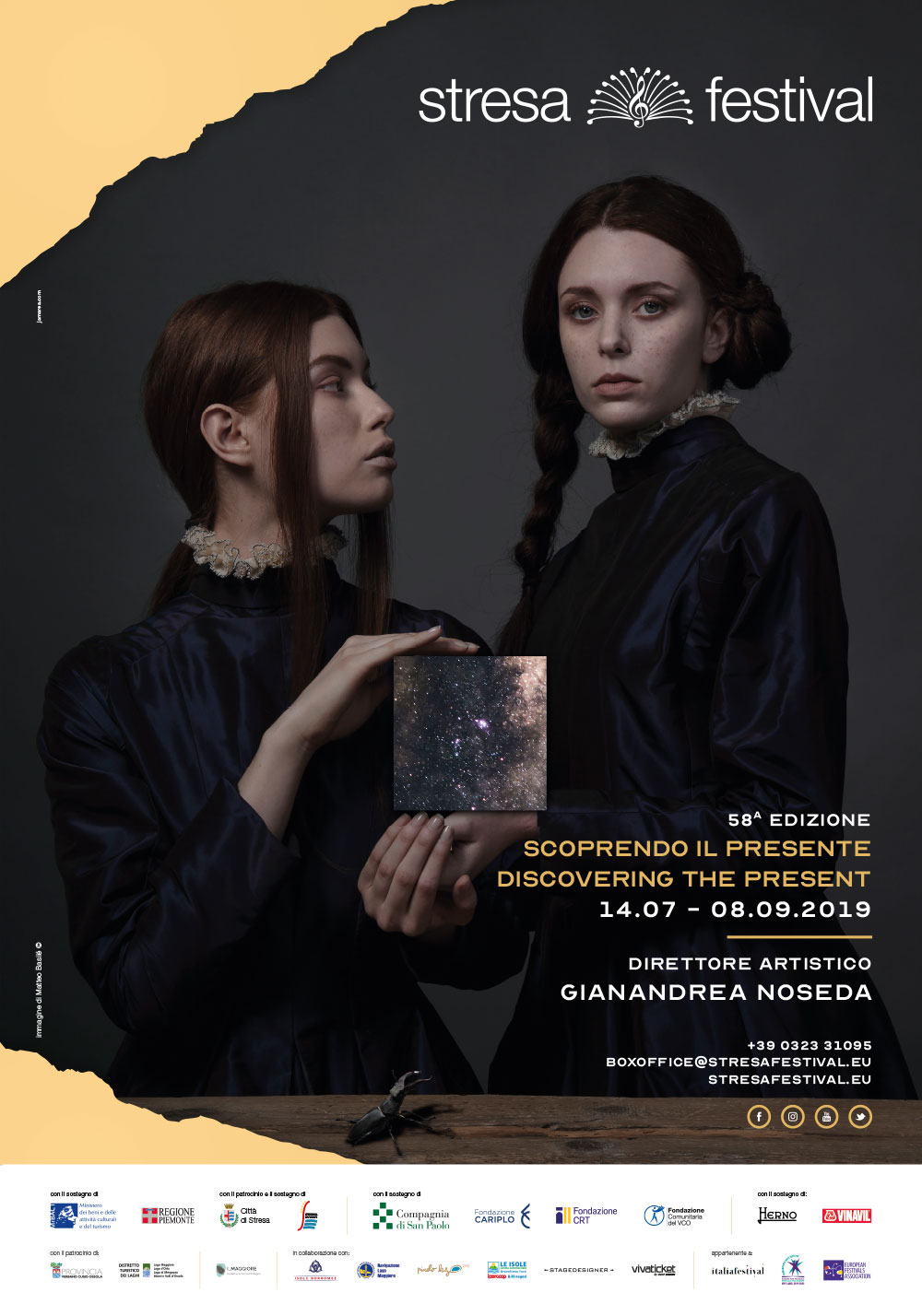 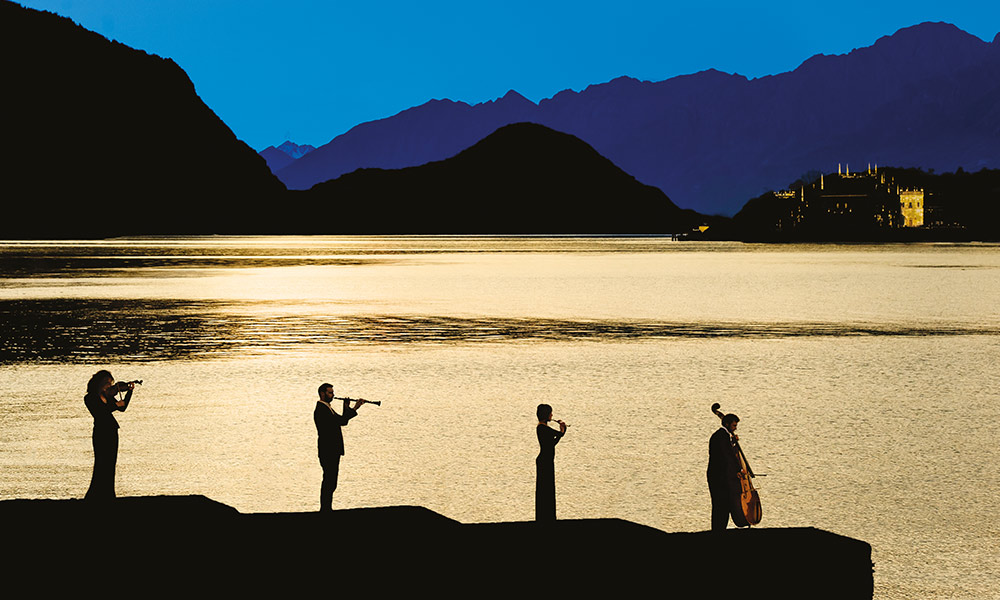 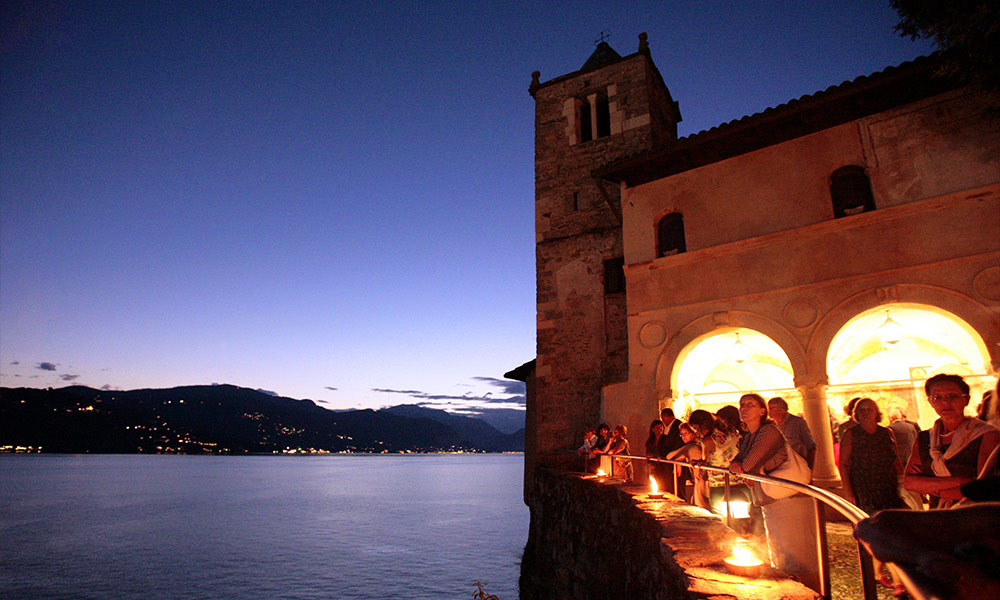 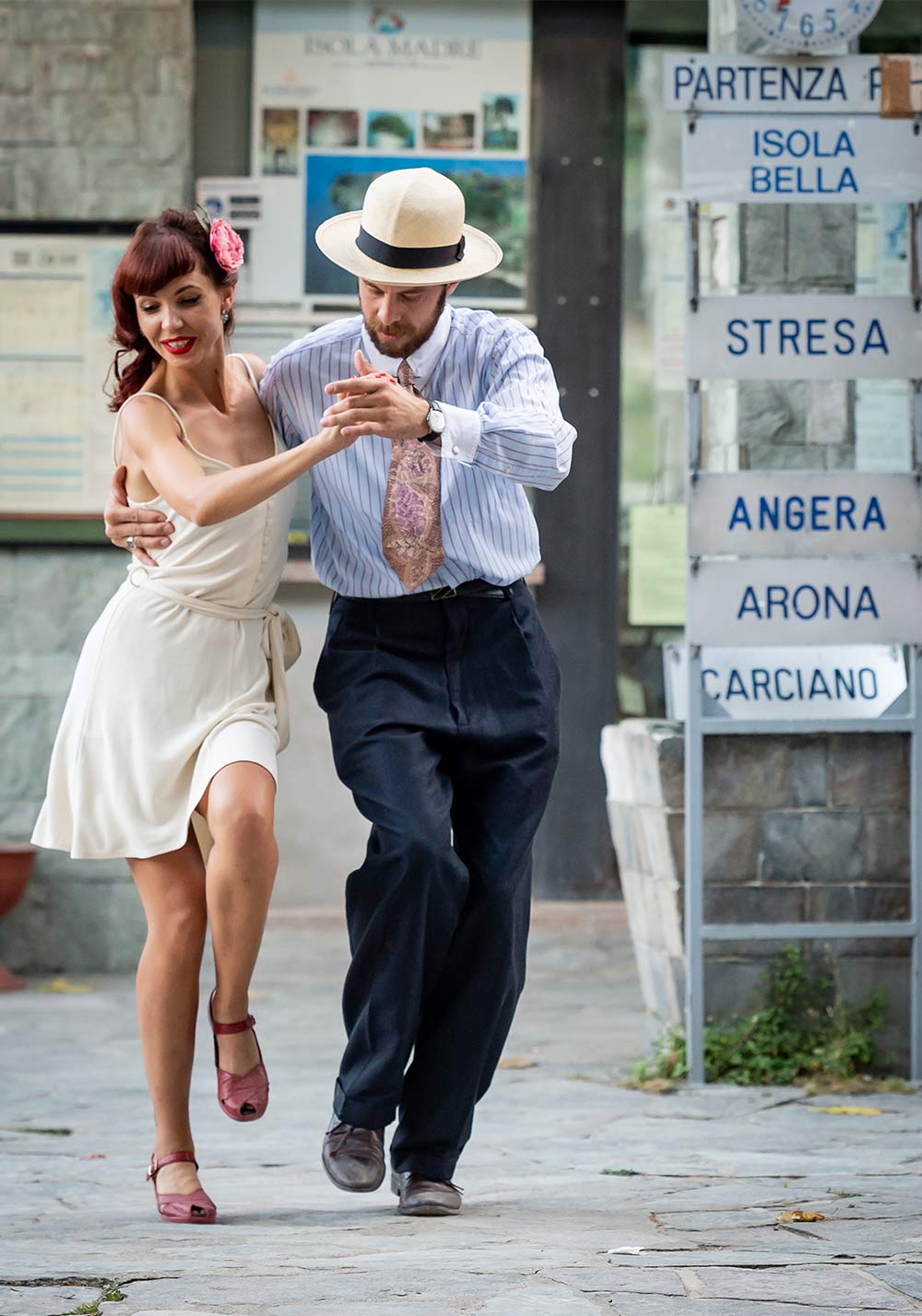 The Stresa Festival has reached its 58th edition in 2019.  As always it will run throughout the summer – starting from 4 to 23 July with nine appointments, then from 23 August to 8 September when 17 evening events are scheduled.

This season sees Gianandrea Noseda in his 20th year as Artistic Director and, like in previous years, he will be leading us through a fresh line of programs, taking in various art forms.

Scoprendo il presente / Discovering the present is the heading that groups the 26 events, in five main themes, to guide our audiences through the program. To start with there is Jazz in Trio, then come Between Classic and Neoclassic, Between sacred and profane, Bach, our contemporary, Music and Literature • Music and Art • Music and Cinema.

Italian and foreign symphony orchestras and ensembles and internationally acknowledged soloists will, as always, be central to the program, and music will of course be the main focus of the concerts. However, once again this year we are offering evenings when other types of music will be on stage, and fresh disciplines such as dance, cinema, literature  and the theater.

There is an appointment with contemporary dance, talks by writers and art critics, a concert lesson, music centered on historical figures, world premières, and what we call ‘performances’ on the Borromeo islands. One evening will be dedicated to a concert by young pianists following a master class; there is a project involving a resident artiste, a choice of early music ensembles using authentic antique instruments and, of course, a jazz week in July – all events not to be missed.

JULY – time for jazz and fado, partying, and literature.

Jazz in Trio will hold the stage in July, with five groups. The Avishai Cohen Trio is an important part of the schedule, and the well-known Israeli bass-player will be there with his group, on 16 July in Verbania, to present his latest work entitled Arvoles – besides some items from his earlier albums.  Another jazz maestro is the British saxophonist John Surman who on 17 July will inaugurate a four-day round in Stresa with his project Invisible threads. Then on 18 July the Festival has commissioned a first-time-ever composition from the Franco-American pianist Dan Tepfer, taking his inspiration from Stravinsky’s Pulcinella. In the evening of 19 July there will be more jazz in Stresa, with the German pianist Michael Wollny – an event organised in collaboration with the Goethe Institut in Turin. Then on 20 July the Italian jazz pianist Danilo Rea, who has a large following among the public, will be on stage for the first time at the Stresa Festival, accompanied by Enzo Pietropaoli and Fabrizio Sferra.

To go back to 14 July, we’re going to enjoy ourselves on the Isola Bella for the Isola in Festival, which had such success last year. Then on 21 July the fun moves to the Isola dei Pescatori.

These are two ‘parties’ with musicians, actors, acrobats and other performers populating the lakeside, and the loveliest corners of the islands. Some of music’s idols – famous composers like J.S. Bach, and Duke Ellington, and numbers from Jesus Christ Superstar and the Beatles will be revisited ironically or celebrated for their historic impact. This evocative trip will take us through classical music, jazz, rock and pop, overcoming all the barriers of space and time. This is a new dimension of Silent disco & Silent dance.

Another island, another story. Four scenes from a wedding play over and over again, in four photographs of the most celebrated events. The two Isola in Festival evenings are organized in collaboration with Musicamorfosi.

Music will meet literature early on 19 July, when the writer and lawyer Simonetta Agnello Hornby and the vocalist Filomena Campus will lay on a performance in words and music under the title Credevo che [I believed that], on the topic of domestic violence.

The last appointment in July, on Tuesday 23, offers a fascinating world première entitled Lisbon story: this is a re-elaboration of the music composed for the famous film directed by Wim Wenders. The Portuguese singer Teresa Salgueiro is the Madredeus soloist who sang the unforgettable sound track of that film in 1994.

AUGUST AND SEPTEMBER: the triumph of baroque, some surprises from the 1900s, and Maurizio Pollini, a living legend.

Maurizio Pollini needs no introduction, and almost 50 years have passed since he was last here – in 1970 – but he will be back in Stresa on Monday 2 September, to give an extraordinary recital in the Palazzo dei Congressi. The Milanese pianist’s concerts are always special, but in this case the program is extra-special: Brahms, Three Intermezzi op. 117, Luigi Nono, “…sofferte onde serene…”, and Beethoven, Op. 106 “Hammerklavier”.

Music on the line between Classic and Neoclassic.

The opening concert on Friday 23 August will see the Stresa Festival Artistic Director, Gianandrea Noseda, conducting the Orquesta de Cadaquès, where he is the Principal Conductor. The program combines two very special pieces: Mozart’s Concerto K. 503 will be played by the French pianist Pierre-Laurent Aimard, who is the artiste in residence this season. In the second part we shall hear the full version of Stravinsky’s Pulcinella, with three well-known lyrical voices:  Barbara Frittoli, Piero Pretti and Nicola Ulivieri.

The second appointment under this heading is on 28 August, with the Orchestra della Toscana conducted by Daniele Rustioni and the violinist Francesca Dego. The program offers a baroque suite, a violin concerto and a symphony, all from the classic period. These show off to the full the masterful composing skills of three giants of music: Bach, Mozart and Haydn.

Dance is back again in Verbania on 30 August. The Compagnia Simona Bucci will perform a new choreography, a world première commissioned by the Festival, freely inspired by a selection from Dimitri Shostakovich’s 24 Preludes and Fugue. Their accompanist is pianist Roberto Prosseda.

On 3 September the English organist, pianist and conductor Wayne Marshall will play the Tamburini organ in the Church of Sant’Ambrogio in Stresa. He plans to start with Bach, proceeding on to Rossini and other contemporary composers, ending up with his own improvisations, which illustrate the wide-ranging talent of this outstanding musician.

Music attributed to the myth of Pergolesi is the focus of the concert in the Palazzo dei Congressi on 5 September. Antonio Florio with the Cappella Neapolitana are the superb interpreters of this stimulating program, which includes some authentic compositions alongside a selection of works wrongly considered to be by Pergolesi.  The extraordinary voice of Pino De Vittorio will bring the music to life.

For the second year running the Festival will host the pianist and musicologist Emanuele Ferrari who on 7 September will give a concert-lesson on Mozart’s masterpiece 12 variations on the theme “Ah vous dirai-je Maman”.

To conclude the 58th edition Nikolaj Luganskij, a pianist of world-wide renown, prizewinner at the Tchaikovsky Competition in Moscow in 1994, will be on stage with the Russian National Orchestra conducted by Michael Pletnev on Sunday 8 September. The program comprises Rachmaninoff’s Concerto for pianoforte and orchestra no. 3 and Shostakovich’s Ninth Symphony.

Between sacred and profane.

Widely acknowledged for their studies of Vivaldi’s music Modo Antiquo and their conductor Federico Maria Sardelli will be in Stresa on 24 August for the traditional open-air concert in the splendid garden of the Loggia del Cashmere on the Isola Madre. Their program concentrates on rare sacred instrumental pieces by Vivaldi: three unpublished concertos will alternate with well-known pieces by the Venetian composer.

The Festival will return to the historical Villa Ponti in Arona on 1 September, for an evening straddling the Renaissance and Baroque periods.  The soprano Roberta Mameli accompanied by Luca Pianca on the archilute will interpret some significant profane pieces by famous composers from different schools.

Music meets Art and the Cinema.

From a topical theme like that dealt with by the couple Hornby-Campus in July – domestic violence – we go a long way back to meet a woman whose life was complex. The painter Artemisia Gentileschi serves as a source of inspiration for a multimedial, multidisciplinary project with videoart and live music, by Anagoor. Starting from the work of this 17th century artist, they explore some particular aspects of painting and music in the early Italian baroque period. On stage will be the soprano Roberta Invernizzi and the ensemble Accademia d’Arcadia, with authentic period instruments.

In the second part of the evening Vittorio Sgarbi will analyse Gentileschi’s work and the artistic environment of that time. This double appointment is on 25 August.

In 1928 Jean Epstein created one of the cinema masterpieces of his time, the black & white silent film The Fall of the House of Usher, based on Edgar Allan Poe’s story of that name. On 31 August this film will be shown to the musical accompaniment for full orchestra by the Spanish composer José María Sánchez-Verdú, who was commissioned to produce this work, which will be premièred by the Orchestra Sinfonica di Milano Giuseppe Verdi conducted by José Antonio Montaño.

The French pianist Pierre-Laurent Aimard will be giving his second concert – after the inaugural evening – in the Salone degli Arazzi (the Tapestry Hall) in Palazzo Borromeo on 27 August. The program is centered on Bach’s monumental Goldberg Variations, with some pieces by Webern, Knussen and Benjamin.

The Kantor’s Arte della fuga is unanimously considered one of the highest expressions of Western music, and on 29 August the Accademia Bizantina with their conductor Ottavio Dantone will give a personal interpretation, in the last concert on the Isola Bella.

The two evenings of 4 and 6 September will see Akiko Suwanai as solo violinist – she is one of the most authoritative virtuosi of her instrument on the scene today. Against the fantastic background of the Eremo di Santa Caterina del Sasso, an exclusive and fascinating setting, she will play Bach’s partitas, alongside pieces by Jolivet, Bartók, Schulhoff and Piazzolla.

Pierre-Laurent Aimard ran this year’s piano master class. Besides his frequent appearances in the main international concert halls, he is widely appreciated as a teacher. His pupils will be on stage on 26 August.